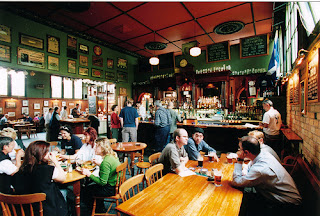 Here is a press release going out today outlining the fantastic news that as of tomorrow (Friday) Croucher Brewing has a permanent tap at the Mecca of New Zealand pubs, Galbraith's Alehouse in Mt Eden, Auckland. And the good news doesn't stop there for Auckland beer drinkers as we are joined by Yeastie Boys as permanent new additions at Galbraith's.
Delightful aroma's made famous in Rotorua are now emanating permanently from within Galbraith's Alehouse, Mt EdenGalbraith's Alehouse, located in a historic library building at 2 Mt Eden Road), has long been the bastion of real beer in Auckland (if not New Zealand). As well as serving its own legendary ales produced on-site, Galbraith's has been building relationships with other New Zealand craft breweries. The latest addition to their tap line-up is a permanent Croucher Brewing tap, along with a permanent Yeastie Boys tap.

Croucher Brewing is a craft brewery based in Rotorua, the aromatic capital of New Zealand (if not the world). Croucher Brewing recently had its New Zealand Pilsner named 'Champion International Lager' at the BrewNZ Awards. Galbraith's Alehouse will be rotating the Croucher line up, including the Champion Pilsner, it's highly regarded Pale Ale, and the regular seasonal and experimental beers coming out of its Rotorua brew-house.

First up on the Croucher tap is October Ale - a very traditional English India Pale Ale (IPA), based on a recipe from the mid 1800's. These hop-laden IPA's were brewed strong (October Ale is a hefty 7.5% alc/vol) to survive a long sea voyage from England to India. Other seasonal beers in the pipeline are a Christmas Ale (think hearty Christmas cake in a glass), a Belgian Singel, and just possibly a return of Croucher Patriot – an American Black Ale.

Croucher Brewing (www.croucherbrewing.co.nz) was set up in 2005 by Paul Croucher and Nigel Gregory. Their goal was to produce hand crafted beer full of flavour that showcases New Zealand hops. While they produce the odd seasonal beer using hops from the USA or England, they remain keen advocates of the characters of locally grown hops – going as far to suggest that some of these New Zealand hop variants could do for beer what Sauvignon Blanc grapes have done for New Zealand wine.

Galbraith’s Alehouse (www.alehouse.co.nz) opened in 1995 as New Zealand’s first real ale brew-pub. Since then they have developed a loyal following for their classic real ales and European inspired lagers. Head brewer Keith Galbraith and brewer Ian Ramsay source all their ingredients from the UK and EU as they believe to brew authentic (and fresh) old world style beers you need the raw materials from those regions.
ENDS
Contact:
Nigel Gregory or Paul Croucher
The Croucher Brewing Company
(07) 348 5888
http://croucherbrewing.co.nz
Posted by Team Croucher at 11:08 AM