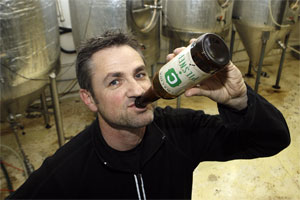 Season's Greetings!
As 2011 approaches, it is a perfect time to reflect on the highs and lows of 2010. Overall, it has been a really good year for us. We have made some huge decisions on the direction of our business, our beers have had some great kudos, and we have been able to grow strongly against a backdrop of recession and increased competition.
2010 HIGHLIGHTS

2010 LOWLIGHTS
Alas, you can't have it all you own way, and there have been a few road blocks, disappointments, and drama's. Some details, however, are best kept in-house.
The biggest thanks goes to all of you who have gone out and purchased our beer this year. We do appreciate your support and enthusiasm, and we consider you a vital part of the Croucher Brewing Team. Thanks, and our very best wishes to you for 2011.