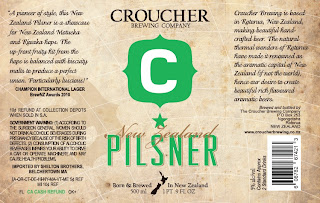 We are in Auckland today bottling the first Croucher beers coming off the line at Steam Brewing. While we continue to brew furiously in Rotorua, we have taken advantage of Steam's expertise to help us produce some serious volume.
Don't worry, we haven't sold out! Rather, we are taking advantage of an opportunity to help us grow our sales and distribution. Over the past year we have been really up against it trying to produce enough beer to meet demand and also provide enough stock to actively grow our distribution around NZ, and God forbid having enough stock to even consider exporting.
A few months back things changed at the brewery, providing us the perfect opportunity to have a thorough look at what we are trying to do and specifically the best way of doing it. Our main issue was that we never had enough beer! We decided to investigate contract brewing/bottling some of our bottled beer. After some analysis, we decided to work with Steam Brewing (winners of multiple trophies at BrewNZ this year, and also the team that work with Epic Brewing). We went up a month or so back and brewed some big batches of Pilsner and Pale Ale.
In the meantime, our Rotorua-brewed Pilsner won CHAMPION INTERNATIONAL LAGER at BrewNZ, thus setting a very high bar for Shane and the team at Steam to emulate. Well, today we bottled the Pilsner brewed at Steam, and it would be fair to say that we are EXTREMELY happy with it! So if you haven't tried it in a while, make sure you get out there and track it down - it would easily be one of the hoppiest lagers in NZ, and is a fantastic showcase of New Zealand hops - to the point where we are re-badging it as a New Zealand Pilsner. Tomorrow we bottle the Pale Ale. Then we are back home to brew, bottle and keg beer there too - and somehow finding time to sell the beers we have just packaged! Anyone looking for a job??
Another exciting change is that, as of this week, we are introducing 500ml bottles to our range. So we will have 330ml bottles primarily targetted at on-premise, 500ml bottles primarily targetted at off-licence and keg beer for these outlets who enjoy fresh draught craft beer. The 500ml bottles have a lovely new label design, which will roll out to the 330's soon too.

The other thing you'll already be aware of is our regular seasonal brews. The latest release is Croucher PATRIOT, our American Black Ale. It has been sent out around the country. The first keg went on at Hashigo Zake in Wellington, with a fantastic review of PATRIOT having already been blogged by a visiting American. On Thursday evening PATRIOT is the guest beer at House On Hood's beer club in Hamilton.

Our next seasonal is called October Ale, and funnily enough will be released in October. It is a recipe based on the early India Pale Ale's from the mid-18th Century. It has been brewed with English malts and English hops, and is shaping up nicely as the perfect foil for all those hoppy American IPA's that are de rigueur. Keep an eye out in mid-October for Croucher OCTOBER ALE.

We hope you are enjoying our blog/facebook/twitter posts, letting you peek behind the curtain at the goings-on at our craft brewery.