You can't beat Wellington on a good day... 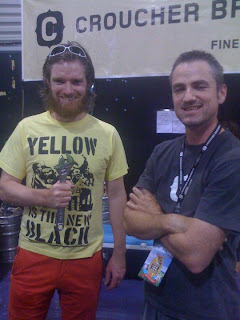 Wellington Beer Fest
Croucher Brewing hit Wellington last weekend for Capital's version of the Liquorland New Zealand Beer Festival. It was held on Saturday at Westpac Stadium, and it was a massive day. We totally sold out of beer 10 minutes before the bars closed - nothing worse than dragging full kegs home again!

A lot of fun was had, with the usual Croucher Brewing crew on deck along with Team Croucher Europe; namely Eva and Isabella from Austria and Thomas and Rupert from Bavaria. They kept punters entertained most of the day throwing ice at each other and posing for photo's at any opportunity.

Hayden Green from Public Address was there, and has written a smart summary of the days events - even listing Croucher Cherry Bock as his favorite beer of the day!! Kudos to us. Click here to read his report.

This festival consumed the last of our stocks of the 2009 batches of Vicar's Vice and Cherry Bock beers (although there may still be some Vicar's at Galbraith's in Auckland and Cherry Bock at The Malthouse in Wellington). Word from the inner sanctum of the brewery is that the Vicar's Vice may be back this winter, and possibly in bottles too.

Football Fever
A trip to Wellington last weekend would not have been complete without attending the Phoenix V Jets football match on Sunday, also at the Westpac Stadium. Neither of us had been to the stadium before and were well impressed. The highlight was the atmosphere created by the Phoenix Fans, the chanting and support was remarkable. In terms of beer, you may be surprised to hear that we passed on the Speights Traverse and whatever other mainstream beers they had on offer at the stadium. Rather, we pre-loaded at The Malthouse on the way to the match (from memory a Yeastie Boys PKB re-mix, an Epic Armageddon, and a couple of Three Boys IPA's between us).
Posted by Team Croucher at 5:34 PM