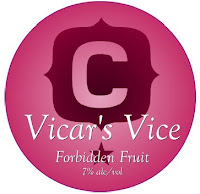 Kegs of the Vicar's Vice (our Belgian Strong Ale brewed with buckets of citrus zest and crushed coriander seeds) left the brewery this week, and will be appearing at the following in the coming days (more to follow):
Next up in the seasonal beer department will be the Black IPA. We've gone over to the dark side for our take on the style-du-jour, India Pale Ale (IPA). Still nameless, this beer is jammed with American hops and is exhibiting simply the most delicious passion fruit aroma. Hopefully this beer will be available on tap within the next 2-3 weeks.
Croucher in Australia
Paul is right now returning home from a few days in Melbourne as part of a NZ Brewer's Guild and New Zealand Trade & Enterprise delegation of some our best craft brewers to the Beer & Brewer Expo. Paul showcased our Vicar's Vice, as well as our bottled beers so will let you know more once he has time to catch his breath.
SpecTAPular took place in Sydney and Melbourne at The Local Taphouse on ANZAC Day, where 10 Kiwi beers were pitted against 10 Aussie beers. Croucher Pale Ale was selected as one of our beers. It went down a treat! A few reviews of Croucher Pale Ale appeared on Beer Advocate in the days after the event, here are just a few choice comments:

"Oh yeah, this is a really excellent hoppy Pale Ale. Bursting with fresh hop characters and balanced for exceptional drinkability. Probably one of the top American style pales I've had, and certainly one of the best from the land of the long white cloud." - Laqueredmouse, Sydney

"Outstanding beer, this. One hell of a quaffer, sessioner, or even a cleanser. Foamy, swilly, and smooth on the feel. Almost perfect. It just doesn't have any edges, it's just meant to be drunk. Fuck it, it IS perfect." - Laituegonflable, Sydney.

Rotorua's newest pub
The Great Kiwi Ale House has opened its doors on Hinemoa Street, Rotorua (the old Cobb & Co site). It is a great looking pub, and has a few interesting beers on tap too, of most note Croucher Pale Ale and Croucher Pilsner. So get in there and support the local brewery! In terms of other taps beers, they have a Mike's beer as well as Mata's Artesian ale, Monteiths Original and Speights.
Posted by Team Croucher at 10:05 PM