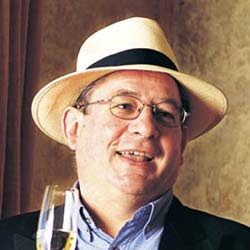 Czech Pilsener PO20
This is a great beer - plenty of lifted hoppy flavours with yeast and floral notes. Lenghty and with an appropriate hoppy bitterness on the finish. Very impressive! 93 points

The formal dinner wine challenge is a competitive event showcasing the best of food and wine tourism on the premier touring routes of Australia and New Zealand. It is based on a five-course degustation-style dinner. Each course is served with two “blind” wines to match the food.

This was the first time beer had been introduced, and Croucher Brewing won for its Pale Ale, matched with the fifth course, which comprised chocolate fondant with rum and raisin gelato. It was up against Flying Horse Brewery in Melbourne, which put forward its Mahogany Porter.

“Some might think that Croucher Brewing was at a disadvantage, because porter is traditionally a good match for chocolate, but our Pale Ale has intense fruity flavours and aromas which complimented the dessert” Croucher Brewing co-owner Paul Croucher says.

The company and Rotorua tourism staff who attended the event were delighted with the win.

The Great Down Under Tour is a marketing alliance between Victoria’s Great Southern Touring Route and the North Island’s Great New Zealand Touring Route (GNZTR), and seeks to focus attention on these regions and the wealth of product each has on offer. The Great Down Under Wine Challenge has been running for five years and has been based around publicity generated from the formal dinner challenge.
Check out the story link on stuff.co.nz:
http://www.stuff.co.nz/marlboroughexpress/4680981a26793.html
Posted by Team Croucher at 1:44 PM